The auroxen belongs to the ox family, weighing from 300kg to 920kg, with the withers height up to 200cm. It has a thick, brownish-black or golden brown fur, which becomes thicker during the wintertime and protects it from the cold. Both genders have horns – protruding sideways and bending up at ends. The auroxen is also called the wild cow, as it was the ancestor of the first European domestic cows. There are folk songs and findings of Neolithic settlements (the 4th to the 2nd millenium B.C) giving evidence of the former presence of the Auroxen. The extinction of the Auroxen in Central- and Eastern Europe can be explained by the environment being transformed by humans, the cutting off of the great forest areas, hunting, climate changes and the fact that the dwelling places of the Auroxen were used by humans for pasturing domestic cattle.

The last auroxen died in Poland in 1627. There are no heirs of the Auroxen, but there are still many European domestic cow species having similarities with the ancient ancestors: long horns, dark colour etc. In the early 20th century, the Heck Brothers, German scientists, started to interbreed the domestic cow species similar to the Auroxen. The goal of the interbreeding was to get animals, similar to the extinct Auroxen in appearance, behaviour, and ability to survive in the wild. The animals interbreed by the Heck Brothers were called Heck Cattle, but in 2004, they were renamed auroxen. It can be said, that the new auroxens are weaned domestic cows. It can be seen in their ability to survive and reproduce without any human help, change the summer fur for the winter fur and keep fat reserves. The cows have a well developed bovine instinct and the ability to find food also in winter: withered grass, leaves, small branches or bark.

The family group of the Auroxen includes cows with their daughters, grand daughters and their offsprings. Also the young bulls do not leave the family group until the age of three or four. During the rutting periods, every family group joins a bull group. Because of the migration in large flocks in large areas, the possibility to mate a cow from the same family group is small.

The auroxen often form pastures for wild horses, as they feed on longer grass. Auroxen live comfortably together with other large herbivores – wild boar, elk, bison, wild horses, deer. The weakest auroxen can die of diseases, bad weather conditions or famine. The dead auroxens are eaten by other mammals, carrion birds and insects. Similar to domestic cows, auroxen are ruminants. As they do not graze the grass to the ground, the grass not eaten in summer is used in winter, which means that auroxen need large pasture areas. The auroxen grazing peculiarities are favourable for the development of flowering plants remaining in the uneaten grass. During winter periods, auroxen feed also on tree offshoots, bark and bushes. In order to reach higher, sappier leaves and branches, the Auroxen bends them to the ground using its horns.

The Auroxen calves are usually born in spring (April and May), which means that the period of delaying flock movement because of the slow walk and inability to defend oneself, is shorter. The cows have small udders and need no milking, as the whole milk is drunk by the calves. The cows leave their flock before calving in order to find a quiet place. During the first days after birth, the calf hides in the grass and the cow stays close to it in order to defend and feed the calf. When the calf has grown up, it joins the flock of other cows. 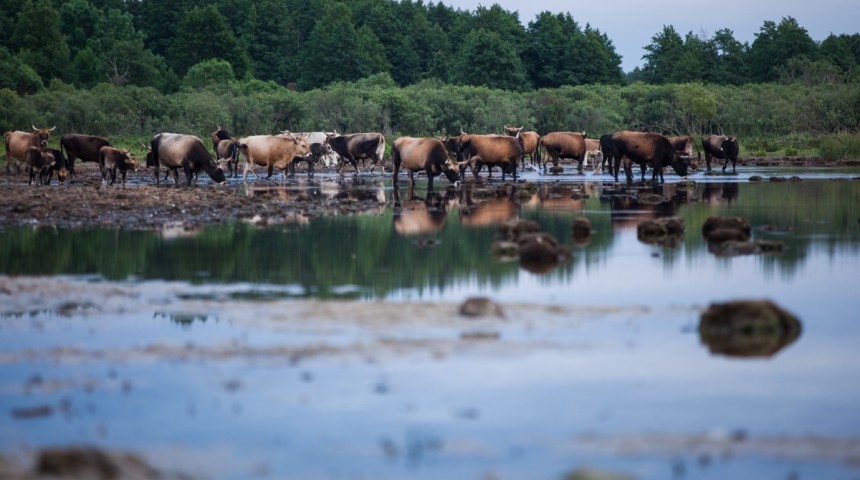 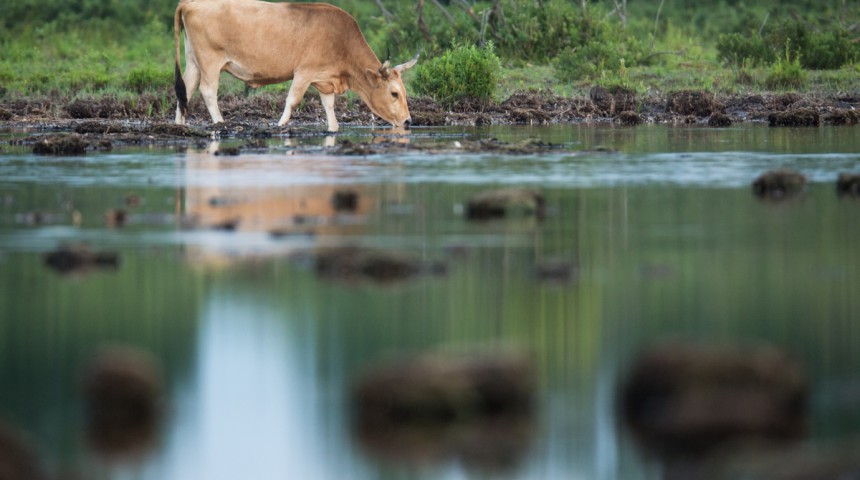 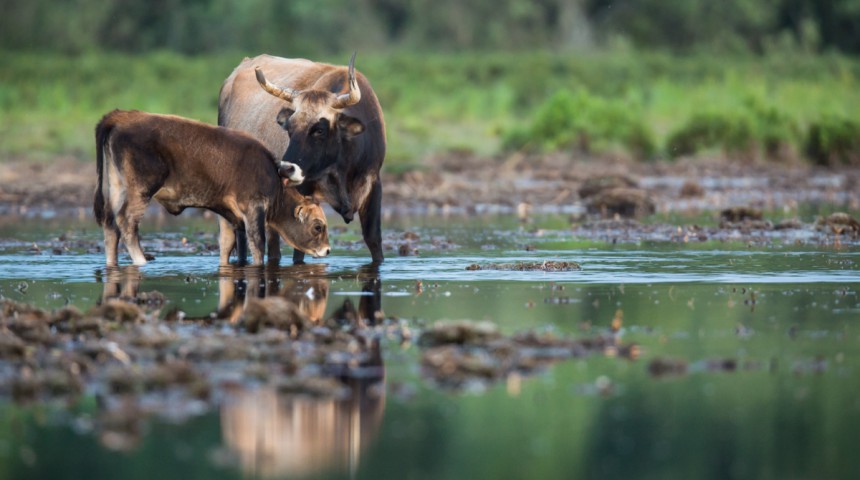 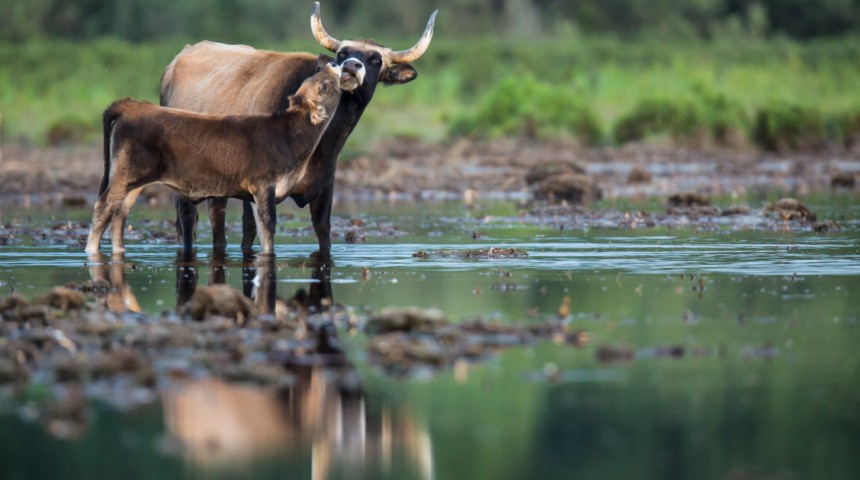 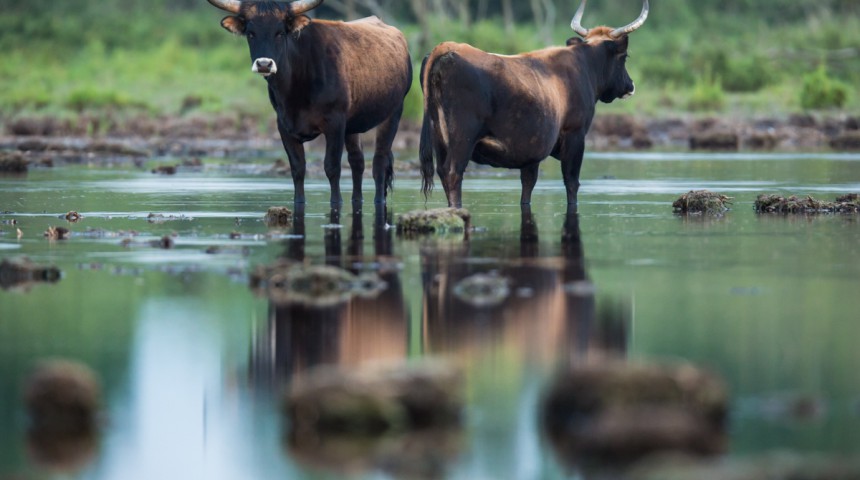 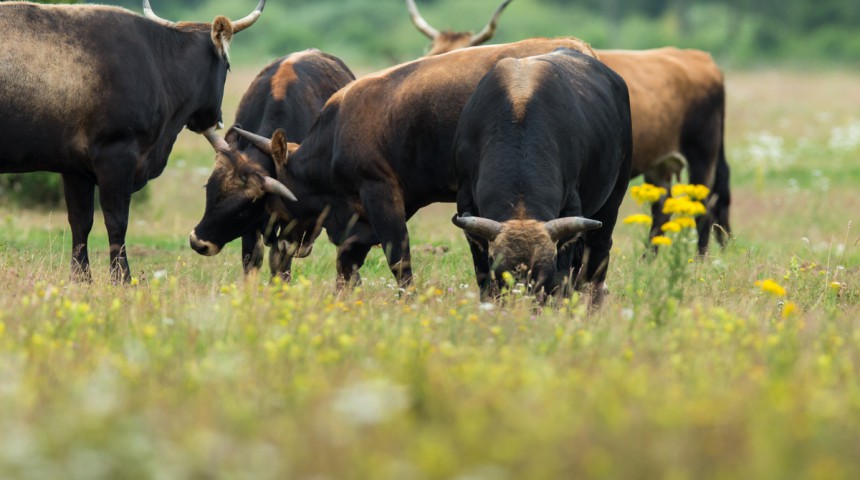